Meanwhile, I am back at the Ranch ... 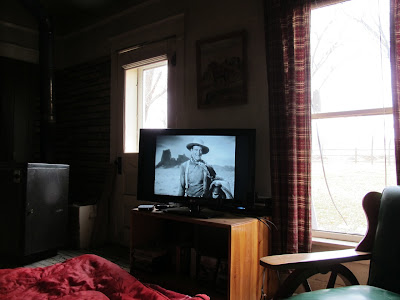 Back to the set, the back lot, the Western stage - after a short Thanksgiving holiday. Ready to get back into 'costume', rehearse my lines and step back into my reoccurring role. The supporting cast awaits in the pasture.
©JEAN LAUGHTON

Getting Ready to Ship Calves 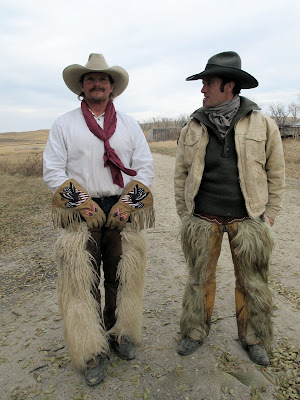 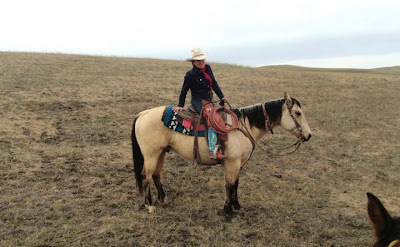 Last week I was trotting along on Cody on the Fox Ranch down the road doing a simple job of moving a few cows to another pasture. I vaguely remember the feeling of my horse going down and seeing his head very close to the ground and ... that was it ... I was knocked out ... I woke up a few minutes later with my cowboy friend Baxter Badure sitting with me and making sure I was covered up and okay while another neighbor Shawn Fox (who is now a cop) asked me if I knew where I was - no, who the president was - got that one after a minute or two. They wanted to be sure all was well so they called an ambulance which arrived a bit later in the pasture - we were in a pretty convenient location luckily - unlike many other friends who have had accidents. Ended up with a concussion and major soreness but luckily nothing broken. And after an overnight in the hospital I came back home to recover and take it easy for a while. The incident made me remember the good friends I have around here and how we can really get in some situations while cowboying together. I have to thank Baxter for staying with me - talking to me and riding in the ambulance with me to keep me distracted and calm - a true friend and for Shawn for putting his cop skills to use. Also funny to run into one of the EMTs at the hardware store and say thank you for his help - such is small town living. All in all, it sure could have been much worse. As my old cowboy friend usually says "it is just part of it" ... true. I figured I wasn't going to talk about it and did not want to appear to be fishing for sympathy, but realized it is part of the story and part of ranching. Just as a calf that dies in a blizzard is part of the story and having to skin that dead calf to help save another bum calf - just part of it - some of the many realities of ranching. And I am glad my story is a mellow one compared to so many stories I have heard from the guys I work with.

I had my first wreck the first year I was working here, back in 2003. But that was different, I was naïve and had much time to think and be scared on a runaway horse for three quarters of a mile. He took off after some horses we were wrangling flew into high gear. The wind was noisily blowing on my face like being on my motorcycle speeding down a back road, as the horse gained full speed. It would have been a great time to yell “cut”or call for a stand-in or stunt double but unfortunately that was not an option. I was definitely playing a part I had not rehearsed enough. As the horse first took off I remember giggling, but changed my tune when I could not get him to respond to me. I had visions of those guys in the movies stepping off a horse and heard stories of local cowboys doing so - but had no clue how to orchestrate such a move at such a speed - being at the very beginning of my cowboy ‘career’. Pulling on his head did absolutely nothing and I am sure my panic helped accelerate his pace – I guess I fulfilled some fantastical dream I had about running a horse across the prairie, but this wasn’t exactly how I had imagined it so romantically most likely while walking down a busy street in New York City. I so wanted him to turn left, away from a barbed wire fence and slowly decelerate while loping in a controlled circle, but he insisted on in a blind run forward, heading toward a corral where I could see my new baby colt Henry standing on the other side of the fence. It was like I was going to crash through the fence as through a gate to another realm to some rebirth amidst Henry’s newness. Just as I thought we were about to crash through, Foxy made an abrupt turn and sling-shotted me into the fence head and shoulder first. I remember seeing what looked like gray shag carpet in my vision and plunking headfirst onto the ground. I don’t think I was out for too long but woke up in a hyper panic trying to walk it off. I walked all the way back to the ranch for a couple miles with my old cowboy friend riding beside me leading my horse. Not the best feeling. Definite initiation for a new comer. I remember happily downing a beer to try and take the edge off. And then went to have things checked out at the hospital. I know that is not the usual routine around here but glad I did, as it dispelled some worries. That day, the movie scripted scene had become reality, at least temporarily, and I was no longer living just in a daydream - somewhere in my time travels to the past. I didn't talk about it much until a year or so after, somehow trying to hold back the tide of fear of thinking of the possible realities of my new job. It sure affected me for quite a while, but I got back on that horse a couple weeks after the wreck. Although I wasn't in a hurry to wrangle horses on him, as he still has those tendencies. But my cowboy friends would have gotten back on immediately - they have been at it much longer than me and have a history of doing it all - quite different than my story. But my story is just my story, I never said I really knew what I was doing but sure wanted to dive in and try. The experience made me want to hold back for quite some time but remember feeling free when I finally let go and let my other horses run.

It's funny but early on when we were wrangling the horses, following at a slower speed, I had a thought of a friend I had seen recently in New York who had looked through me with some concern as if he were watching this event unfold in a preview and warned me to be careful - strange how the things connect.

I heard that two other crew members went down with their horses this week - got rolled over etc but are okay - no knock outs or major injuries. So, maybe we are done with that for a while ... I think of all the miles I have ridden and time running full out after a cow across the prairie and feel lucky to have stayed upright for almost all of it! Onward ...and yes, Cody is just fine - no injuries, he just stepped in a hole I was told. We will be back to work together in a week or so. I am feeling much better after a week and all will be fine. Onward. ©JEAN LAUGHTON

October 23, 2011
Another gorgeous fall day to work cattle - golden grasses surrounding the herd held in place by a few cowboys with a big painterly sky as backdrop - worked steer pairs off - chased a few that tried to get away ... trailed the rest of the pairs to white butte pasture - counted them through the gate and pointed them to the dam ... rode back for lunch through rolling yucca covered riverbanks ... nice way to spend the morning in Cowboy Country ...

October 26, 2011
Chilly early morning gather on the Badure Ranch - rode toward the back of Porcupine Pasture and into the rising sun - the crew split and gathered the expansive yucca covered cowboy movie looking pasture - multi colored cows and calves coming from the northeast met with crew and cows coming in from the southwest - trailed across Blackpipe Creek and golden pastures onto the road for a few miles to t...he headquarters - Weened and worked the calves to the background noise of many bawling cows ... pit stop in the house for lunch and a photo slide show from the past 8 years ... time flies ... the archive of stories grows ... much work to do to prepare for shipping and the inevitable winter to come ... such is the endless cycle of ranching life ...

October 26, 2011
Coyotes first evening howls as the sun sets behind a bank of purple clouds - Pony glowing white way off up in the hills - Henry and Flaxy eating their hay in the corral - a sudden rush of wind as the sun disappears then silence again ... soaking up my last couple of weeks and the view out in the Scotty ... time to start stocking up on firewood for my move back into the bunkhouse ...

October 28, 2011
Woke up to a dark starry sky & saddled up my pony -pre dawn drive to Stanton Anderson's ranch for shipping day - view of Badlands silhouetted against the pink sky - big buck crossing the road in front of me - Rode with the crew south from the ranch for several miles to gather a herd of mixed breed & longhorn cattle some belted some spotted making for a pretty sight as we trailed the Hollywood type herd several miles back to headquarters - did the usual penning, sorting and loading and off to market ... great lunch with the crew - gorgeous day for a ride across the prairie and Badlands ...

October 30, 2011
Colossal orange crescent moon hanging so low over the Badlands it looks to be resting on top of them and within my reach ..