Photographs From Out West


I came across a several photographs from the 1990's into early 2000's. Mostly from my GO WEST and other road trips. It is just a small random selection from the piles of negatives - some I really love, some so so - but all a part of the story of how I got to where I am. I can still remember each set up and where I was and at which point of my photography adventure I was on. They aren't perfectly edited or scanned and not all from the same series. Obviously I am not some National Geographic photographer - just me as an artist using photography to take notes along the way. Some are 4x5, some Polaroid, some Rolleiflex, some plastic camera stuff  - but I like how the randomness of the order paints a clear picture for me and brings back a lot of memories. Makes me long to wander again. The locations look like LeMars, Iowa / Cheyenne, Wyoming / Burwell, Nebraska / Pine Ridge, South Dakota / Monument Valley / Ponca City, Oklahoma / Cody, Wyoming / somewhere in Texas / Harden, Montana / North Platte, Nebraska / Pinedale, Wyoming / Ft. Worth, Texas / White Sulphur Springs, Montana / Crow Agency, Montana / Minden, Nebraska / Ft Pierre, South Dakota / Cowtown, New Jersey / Interior, South Dakota / Parmelee, South Dakota - with the timeline ending with my landing here on this ranch back when this current chapter started. My pre-ranching era when I let photography lead me where it may. I think I miss being on the road. There is nothing like the lasting quality of doing something that you really enjoy - just for the pure joy of doing it and creating - going with a feeling. The effects of which linger for a lifetime to inspire and ground you with the confidence of knowing you did it. While wandering, I sure did meet many great people along the way. I am not sure what it will all end up as - but it just is and the photographs are just what they are. I happened to take a pit stop on the ranch for an alternative adventure ... for now. ©JEAN LAUGHTON

Best Actor in a Supporting Role 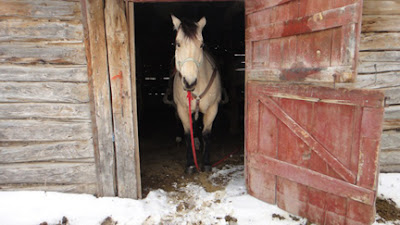 Cody : Best Actor in a Supporting Role - literally and figuratively. We have spent many many hours together and rode hundreds of miles - a true sidekick and saddle pal. We will be joining up again for a sequel performance this Spring for calving. I would like to thank Cody for his calmness and evenness - being able to withstand any situation we got in and helping me to keep my cool - roping, blizzards, crazy winds, crossing rivers, running after cows, thunderstorms, nighttime rides, swooping eagles, grouse jumping up out of the grass, crossing bridges, photography horse and more. To start telling all of those tales now would be the beginning of a long script read through. We did survive a couple stunt accidents together but I know they were just missteps on his part - nothing malicious. Here he is, looking as handsome as ever, 'backstage' in the wardrobe department - getting ready to step out onto the prairie stage for another day of ranching adventure. ©JEAN LAUGHTON

Best Actor in a Leading Role 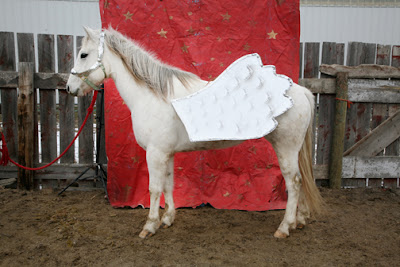 None other than PONY! Here he is in a 'film still' shot on location. Grace, charm, elegance, professionalism and the most patient Pony ever. An Academy choice but also a real crowd pleaser. A somewhat shy and demur fellow, Pony prefers to pass on the acceptance speech and to do a celebratory rear up instead. BRAVO PONY! Every production needs a dazzling leading man - and you filled that bill.©JEAN LAUGHTON

On this day of the Academy Awards - Baby and the Cows do a little silent film era tribute as Baby steps out of the crowd (herd) to walk the white, not red, carpet to the stage - all the while ever poised for the camera - to accept her Academy Award for Best Actress in a Leading Role. Ever the consummate professional, Baby decided to stay 'in character' for the ceremony from her current rugged winter production. ©JEAN LAUGHTON 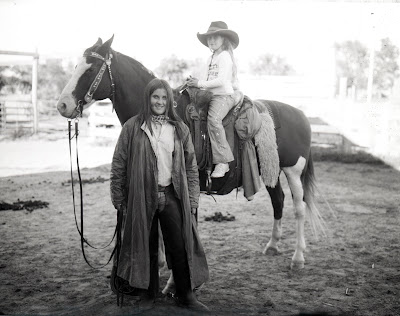 Atop the river banks over looking the White River and Lyle O'Bryan's Quarter Circle XL Ranch with My Beau on the left, Lyle O'Bryan in the middle and Cody, who has become my primary ranch horse and sidekick, on the right (2005). Back in the early green horn dress rehearsal days of my current ranching role - still in my 'understudy' position. Although I am no 'Eve Kendall' to Lyle O'Bryan's 'Margo Channing'! (ha)
This photograph isn't exactly a film still  - more like a location photograph, a behind the scenes shot, a continuity shot for wardrobe and props or a casting photograph of a true American original. I could have used a 'stand in' at the time so I could have photographed the likeness of myself back in this earlier time of discovery and use it as a reference point and reminder of my evolving role as part of the cast and crew on the ranch. I do miss the naivety of earlier times and find it difficult to recreate those feelings - perhaps if I were a better actor. At times it feels as if I am going backward and forward in time simultaneously.
Looking down upon the ranch as stage and back lot then, I could only imagine what adventure was to come and drew from my memories of cinematic imagery to create story board like thoughts in my mind. I knew the basic plot, but wondered how my 'character' was to develop and how this story would play out. Along the way, I realized that my desire to direct and control the unpredictability of ranching would be somewhat futile.
Over the years, the supporting cast has been nothing but cooperative - the special effects crew always has a surprise in store and despite the occasional misspoke line, break in character, lack of stunt doubles and on set injuries - it has been one long glorious, albeit sometimes challenging, take - so far ... continuing onward like a old time Western serial - without the chase scenes and shootouts, of course. ©JEAN LAUGHTON 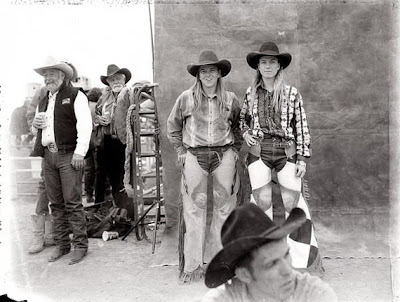 The Ayer sisters at the world famous Miles City Bucking Horse Sale spring of 2003. Standing out amongst a sea of male bronc riders and carrying on the tradition of women rough stock riders of the past competing for the win as stock contractors bid on the horses they are bucking out. This was the first spring I had moved to the South Dakota and the second time I had been to the historical bucking horse sale (est 1914). It is quite an event to see - even though I hear the old days were much wilder. As I walked behind the chutes to photograph,  I was surrounded by dozens of saddle bronc riders sitting on the ground on the their saddles limbering up for the all rough stock rodeo. It was inspiring to watch the Ayers sisters calmly and confidently make their way through the crowd to the chutes, get their saddles and halters on their assigned horses and step over into the saddle for their ride. Strong focused ranch women in their element - the real deal.
©JEAN LAUGHTON

Snapshots From MY RANCHING LIFE 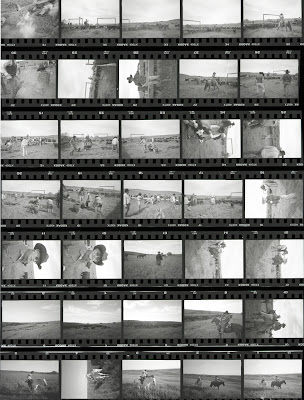