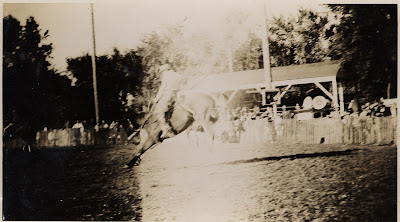 When I first started working on the ranch and spending many a waking hour on horseback - my ranching partner, Lyle O'Bryan, would tell me story after story as we rode along with an occasional intermission of song. A true 'singing cowboy' - crooning from horseback as I would call out my requests. Among his many stories and characters who starred in them, he had told about a bronc rider named Homer Stanz. Homer, and many others, live on in Lyle's storytelling. And boy, can these cowboys tell stories. The tales fill the time like a narrative from a bygone era  - as I ride along - creating reel after reel of nostalgic cinematic images in my mind.

At the time, I was also going through some of the photographs my Great Grandmother had taken at rodeos - one stood out - the caption on the back read "Homer Stanz on Brown Jug at Lennox 1944". Here was the character portrayed in Lyle's story come to life of sorts in an old faded photograph that seemed to be layered with the haze of passing time. Like a storyboard image from an old movie production that matched the mental images conjured up by Lyle's story. I like the imperfections of the photograph which add even more romanticism -  making the moment seem rather elusive yet attainable - like an x-ray of a memory or thought.

I love and live for such coincidences in life - that somehow bring it all magically together. To have photographs come to life or stories told come to life in photographs. The moment when the past intersects with the present. Reality based fantasy. ©JEAN LAUGHTON

On the occasion of this sizzling dry summer - I present, to you, these chill inducing snapshots ...

My first cross country trip from NYC, in my $500 Impala, through New Jersey, Pennsylvania, West Virginia, Maryland, Virginia, Tennessee, Arkansas, Texas, Arizona, New Mexico, California, Utah, Louisana, Mississippi, Alabama, Florida, Georgia, S. Carolina, N. Carolina and Colorado (not in that order!) ... It was the Western part of this trip that had the most affect on me, starting me on the path to where I am today. I found a photograph of a room I stayed in near Valley of the Gods which had a view similar to the one from my current house ... life is funny ... I am so glad I took that trip and let life take me where it may ...
(Polaroids : Monument Valley / Decaying Roadside Relic)
©JEAN LAUGHTON 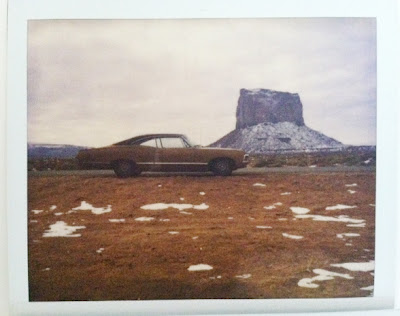 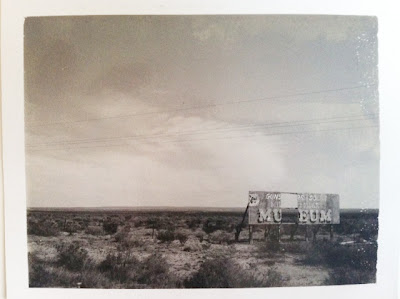 It is with regret and great sadness that I note the sudden passing of good neighbor and lifetime area rancher Jack Brunsch of Norris, South Dakota. My deepest sympathies go out to his children, mother, siblings, family and friends.
(photo on the Brunsch Ranch on shipping day 2006)

I went to Jack's wake last night and was able to visit with many people. It seems different out here at a wake - of course it is tragic and sad - but people seem more resilient out here - maybe it is the lifestyle and enduring many things - but there was just an a good attitude and positive visiting - along with the expected sadness - close friends telling stories and laughing. I think also it is the ranching way of life - you spend so much time on a ranch and you know your friends are close by but you don't see each other that often and a get together for a funeral seems to have all of these added socializing aspects to it. There is a real strength behind it all. Again, my thoughts go out to the family and Jack's kids and all of the changes they will be dealing with - but he raised two good strong kids that can most likely handle it and carry on with all the ranching and cowboy knowledge Jack taught them. And they are surrounded by family and so many neighbors who knew their Dad his entire life.
©JEAN LAUGHTON

Just when I was starting to question my photography and wonder where to head with it next - I had a very un-sublte reminder that photography has taken me on the path to where I am now and has allowed me to meet so many great people along the way and has added this magical serendipitous aspect to my life ... it would have been so dull, so far, without it. It has been a great tool to open the door to so many great moments and travels back in time. 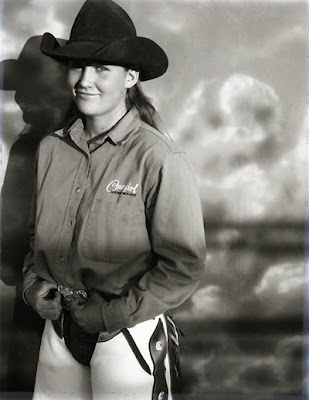 I look forward to a longer visit and photo session with Tavia and her new family. These women are the REAL DEAL! 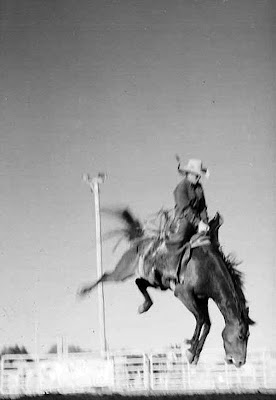 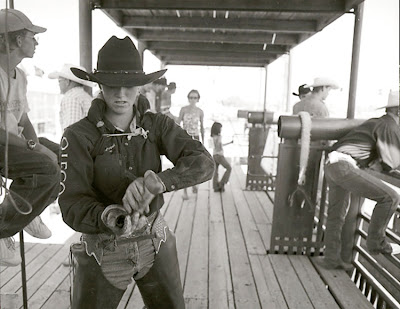 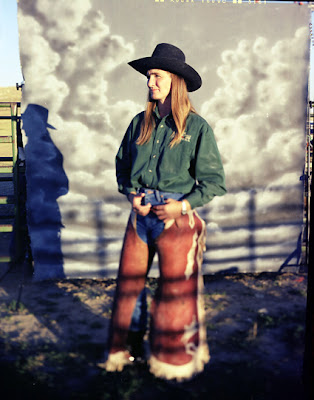 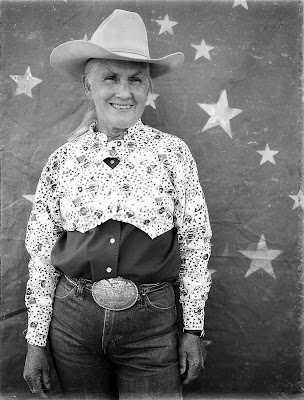 A Photograph Come to Life

There is something great about seeing one of your photographs from the past 'come to life'. Like seeing a Hollywood actor shopping in the grocery store ... I ran into "DODGE" (from my GO WEST series) last week. Aka : Clint Humble pickup man for the Powder River Rodeo / NFR Pickup Man / Badlands Circuit Pickup Man / Dodge National Finals Pickup Man & Omaha Finals Tour Pickup Man.

The photograph on top was from 2002 in Miles City Montana at the Bucking Horse Sale when I was still living in New York and still just a spectator. The photo below is at the Belle Fourche 4th of July Frontier Days Rodeo this year - after several years of ranching and cowboying and definitely seeing things from a different perspective now. 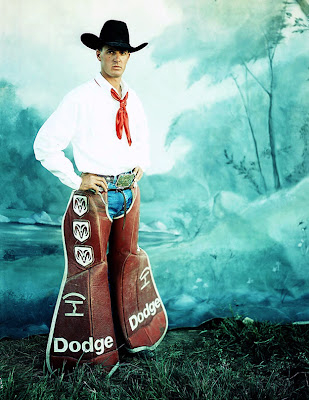 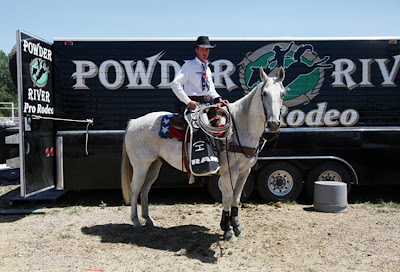 It felt funny to think of the time that had past and realized impossible to be that wide eyed photographer again - although I still love watching the bronc riders and pickup men at the rodeos and a have a great respect for their talents.

You know that song lyric  'just something about a pickup man' - what did I know, I always thought they were talking about the guys that picked up at the rodeos. It is pure grace and talent in action watching a pickup man run his horse calmly at top speed around the rodeo arena and pull a bronc rider of a bucking horse - rope broncs and pull the flank straps off.  I love standing just inches away along the arena fence as they speed by in pursuit of a charging bronc.

There have also been a few good women picking up at rodeos in the past ... I hope to meet up with "DODGE" again soon and do an updated 'real' photograph with a new backdrop, my 4x5 camera and with a new perspective. ©JEAN LAUGHTON