Some 'Day in the Life Of' Writing 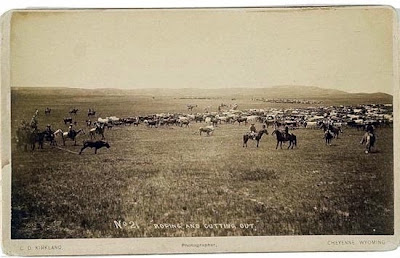 (Working cattle today reminded me of C.D. Kirkland's gorgeous photographs from the 1880's - everywhere I looked was another picturesque scene from the past ... I love living between time periods)

Monday - September 17, 2012 : 4am call time in my chilly dark Scotty Camper. I put on my 'costume' of chaps, spurs and hat and stepped out onto the prairie stage for today's scene. We walked out to the old log barn, under a partly starry sky, to saddle up the horses by lantern light. Loaded Cody & Foxy in the old ranch trailer and headed down the road about 30 miles to the Brunsch Ranch. The first beginnings of daylight were starting to appear as I saw what I think was the Space Station fly overhead - appearing intermittently through the clouds. Oblivious deer lingered in the barely visible ditches and passing badlands just began to come into view as the 'stage' was gradually lit as if by a dimmer switch.

We pulled off of highway 44 just past Corn Creek, and drove down the long driveway of the Brunsch ranch as ranchers from all directions arrived to help work cattle. This is the first time we have 'neighbored' with Misty and Alan Brunsch, on their own, since their Father, Jack Brunsch, died suddenly this summer. They are both in their 20's and they came back home to take over the running of the ranch and all of the challenges and responsibilities which come with the job. They did a great job today. Jack raised two good hands capable of handling whatever comes their way. The ranchers I cowboy with knew Jack most of his life and it was a surreal feeling to not have him there. Funny stories were told and fond remembrances discussed as the crew of hearty ranchers have a positive way of dealing with loss. Today we were all there to get the usual annual fall ranch work accomplished. I couldn't help but think Jack was going to come riding in and hollering behind the herd.

We parked the horse trailers in a line to create a wing for penning the herd. Then a crew of twelve of us headed out on horseback to gather the cattle. The sun was coming up as we rode to the back of the big pasture. As we were riding along Alan's horse jumped in the air and reared up while about going over backward - sending Alan through the air landing flat on his back. He jumped to his feet and still had the bridle reins in his hand. I guess that is just part of it. Little excitement to start the day - but everyone in the crew is so used to such stuff - he hopped back on and we rode on.

We spread out and gathered the black cows and calves. I rode the creek and we did our best to keep them from running East. It is always a little exciting gathering pasture on the Brunsch Ranch and best for me to switch to decaf when riding there. I found a cow bogged down in the creek with her calf standing nearby. They got her pulled out. I had a fantastic view from the saddle of cattle being trailed in from several directions forming black lines across the golden pasture. They were pushed into the corner of the pasture where the were held by surrounding cowboys. A couple of riders rode amongst the herd and worked 60 head of replacement heifers off, one at a time. This small cut was held by another cowboy. Then three of us trailed the replacements east while the rest of the crew trailed the herd into the home place and penned several hundred pairs. As we rode back from trailing the small bunch we could hear the roar of the cows bellering as the crew of cowboys worked on horseback to temporarily separate them from their calves so they could be vaccinated.

In the middle of it - we took a lunch break inside the old Brunsch ranch house where Lucille Brunsch still lives into her 90's. The house is full of old family photos that go back generations. As I sat in the small 1950's style kitchen around the table with the rest of the cowboys I thought of where I was and what I was really doing. Thought of all the family dinners that had taken place here and the years of raising kids and feeding crews of cowboys over the decades. Out the kitchen window, I could see the cows waiting on their calves and felt as if I were sitting within a three walled 'set' of an authentic family ranch house in a big movie studio. But I also remembered that this is real life and this is true family ranching carrying on amidst difficult times.

When I walked back out to continue work there were beautiful soft fluffy clouds in a blue grey sky as backdrop to the old timey corrals and windmill. Such a gorgeous image. As I have said, the land as set and stage, has a permanence - but the cast of characters changes as time rolls along. Family ranching traditions are carried on and the presence of missing family members is always felt. As I looked out, I could see that the extra horses came in to watch the action. There is something about seeing a missing cowboy's horse, without its rider, come loping across the golden prairie.

We finished working the calves and got back on our horses to push the herd back into the pasture. I rode along listening to historical stories from Lyle O'Bryan,78, who neighbored here as a young man with Jack's dad, Paul, when Jack was just a toddler. As I turned my horse around to ride back to the home place, it appeared in front of me, from a distance, like an old cowboy painting. There was a group of horses in an old wooden corral - the old wooden windmill - few modest buildings and the small family ranch house with Badlands in the near distance. As Lyle put it - it looked like a 'real cowboy outfit'. Alan and Misty carried on the cowboying traditions today and their years working with their Dad enabled them to handle it well. All of the day's work was completed and we said our goodbyes as cowboys loaded up their horses for the drive back to their respective ranches.

We drove back home with Cody and Foxy in tow, through gorgeous Badlands while struggling a bit to stay awake. When back, I wrangled horses for the next day's work. Then early to bed, as it will make it easier for an early rise tomorrow to help some other neighbors. Such is family ranching south of Belvidere, South Dakota and the beginning of a new chapter for one ranching family. ©JEAN LAUGHTON

On the Quarter Circle XL Today


This scene, from a vintage postcard, is pretty much what today looked like on the ranch. Living life, as if in a vintage photograph, can be quite interesting.

My ranching partner and I did a little late branding today. Or, since we already did some late branding last month, maybe this was more like a late late branding - like the late late movies of yore. Our crew consisted of two cowboys instead of four.  First we built our fire from scratch - chopping up a piece of cedar into fine pieces for kindling - then once that was burning - adding more wood to get the fire hot. When the fire was ready, I started roping the big ol' calves and drug them down. Then, Lyle, my 78 year old ranching partner, stepped in to pull them over and tied up their front legs while I held onto the back legs with my dally - like the photograph above. If I only caught a single 'hocker' he would take my loop off, quickly, while I undallied - to place it around both hind legs then I would dally again and stretch the rope out tight. With only a small group in the pen, they got to running a bit,  so I didn't always get them by both back legs - although I should have. And once, there was most likely a world record set in between catches - giving cowboy and cattle time to reflect - ha ha. While I held on to the back legs and stayed dallied - Lyle ear marked, vaccinated, cut the steers (or soon to be steers) and branded. When that was all finished, he untied the front feet and I undallied and gave the rope slack and, voila, the calf stepped out of my loop ready to head back out to pasture and not be bothered again. Good to be getting the later bunch vaccinated to keep them all healthy as it has been a hot dry summer.

One calf was pretty hefty and would have been quite a struggle to wrastle down with one guy - so we got him by the head and heels. Since I really didn't relish the possibility of sitting somewhat helplessly atop my pony while dallied onto a giant calf and watching my partner get trampled like one other time. So ... Lyle rode in ahead of me - I guess to give me some competition - threw a loop and got a double hocker (of course) - I rode in and threw a loop around it's head and we stretched it tight so that it laid down. Here you can see a well trained ranch horse in action - Lyle was tied on hard and fast, like all old time cowboys do, and he stretched his rope tight with his horse staying in position to keep it tight - next he took his bridle reins and tied them around Henry's neck and over the rope - he then stepped off to brand and vaccinate while I kept hold on the opposite end of the calf. If the calf moved and the rope got slack - Henry, without rider, stepped back to keep it tight while Cody and I did the same on our end. At this point, I was wishing I had a camera mounted on my hat so I could document this real cowboy moment - but probably best to just pay attention to what was going on - as I do like having all ten of my fingers.

For all you cowboys out there - this will be old news - but for any greenhorns -  thought you might enjoy a description of this morning's work on the ranch. Working with an old time cowboy sure keeps me on my toes and keeps me from doing things the easy way. Today reminded me of the 'old days' when I first started working on the ranch and Lyle and I branded the entire herd by ourselves. That would have been my first semester in cowboy college. Fond memories and a renewed appreciation of what I get to do out here. ©JEAN LAUGHTON