PHOTOGRAPH OF PHOTOGRAPHING THE REAL AND IMAGINED WEST 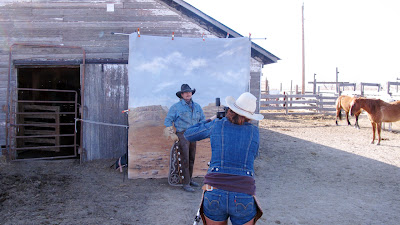 COWBOY PHOTOGRAPHING PHOTOGRAPHER PHOTOGRAPHING COWBOY - Paul Scherf took a shot for me of me photographing Baxter Badure on the Badure Ranch - Belvidere, South Dakota. I pulled out my old GO WEST backdrop which I love even more now that I have GONE WEST. Making for a nice mix of real and fake reality. Of course on the Badure ranch one could photograph for days on end with endless wardrobe changes of handmade Baxter Badure chaps - vintage beaded leather gloves and coats - saddles etc etc ... limitless possibilities to photograph real life characters who look as if they stepped right out of the movies which portray the characters of the West of the past. Life on this 'movie set' is grand. 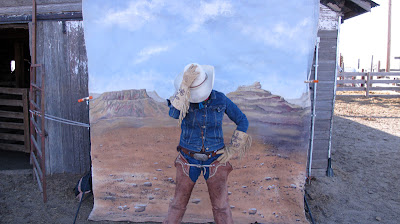 Now I have gone full circle. My GO WEST drop from the mid 1990's that I took around the West with me to photograph at rodeos http://www.jeanlaughton.com/html/gowest/index.html#  The landscape of which I felt as if I was inhabiting and riding my Pony around in when I first started working on the ranch almost ten years ago. Now, stepping outside of it a bit to look back at all the experiences and adventure I have had so far - all the great cowboys I have had a chance to work and ride with. Standing in front of it,  in my cowboy 'costume', straight off horseback to do a little photo shoot in between action scenes on the wide open 'backlot' Range. Being photographed by a cowboy to top it off. Like riding the outside full circle of life. I feel so fortunate to have been welcomed onto Lyle O'Bryan's ranch and into the world of the ranchers and crew and history south of Belvidere, South Dakota. Changing the course of my life drastically when I jumped on the back of a horse and rode along with an old time "Gus" cowboy onto the set of  a grand epic Cinemascope adventure. Life imitates art imitates life. I like it best when I can't tell the difference between the two and each day on the ranch feels as if I am riding within a movie scene. The cinematic ranch life continues. Giddy up Pony.

One for Chris & Diana

Penning cattle on the old Double X Fall of 2011. The sun had just come up and was casting nice long shadows - making the crew appear in double. In back in the light chaps is Diana Elwood. Her husband Chris Elwood is up front on the point. This is near the end of their long stint as managers of the old Double X - good memories. The rest of the crew : Colter Carlson, Baxter Badure, Cole Heinemann, Bob Fortune, Charlie Fortune and myself. Came across this negative and made me think time spent working on horseback with my friends Chris and Diana - riding on the movie set like beautiful old double X in true cowboy country. How lucky I was to get to ride the range for several years with the cowboying couple. (double click to enlarge photograph)

Lyle breaking Henry on his Quarter Circle XL Ranch. Back when Henry was a youngster. A true cowboy and horseman at work - here he is working Henry and warming him up before he gets on for the first time - he also did some foot work getting him to give and work his feet. At 78, Lyle continues to ride young horses and get them just right. Henry was one of the last two colts Lyle started from scratch. I feel lucky to have been a part of that. I got Henry as a yearling at the sale barn in Philip, South Dakota back in the early days of my ranching adventure. I had no plans to buy a baby horse but when he came into the sale ring I said that's the horse I want. I remember lifting Henry up to get him into the horse trailer as he was so little. Bringing him back to the ranch to start his new life. We fed him and took care of him until he was ready to break - with a few delays because of injuries to Lyle. He bucked a lot when Lyle first put the saddle on him and if you you cinch him up tight and hurry to get on him before he is warmed up, he will start to buck. A mistake I made a couple times. The first time I remember Lyle's voice from across the corral - 'get off!" as I could feel Henry start to hump and luckily I stepped off before he blew up. Every time I get all confident it all wakes me up again and reminds me to be thoughtful and take all the necessary steps. He did it again a few months ago but we rode it out and it was minor but reminded me to be present and mindful and not rushed when riding a live animal! Lyle has made Henry a good horse - nice and light in the mouth - any bad traits he has are most likely from me - we have had our moments at river crossings and him throwing fits with me - something that would not happen if Lyle were riding him.  My fears get the best of me sometimes - I am not anywhere near the Lyle O'Bryan level - someone who has spent fifty plus year riding whatever was handed to him to ride and making it work - staying in the saddle the majority of the time while doing it. Lets see how calving season goes as I get back into daily riding - should be good. 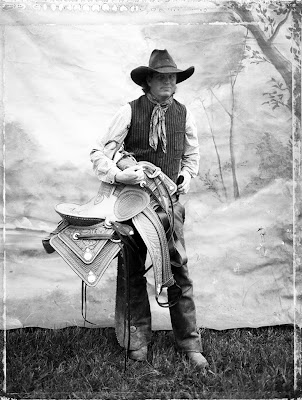 Paul Scherf - on the Badure Ranch next door a few years back - holding his original Baxter Badure saddle. A one-of-a-kind work of art to keep for a lifetime. 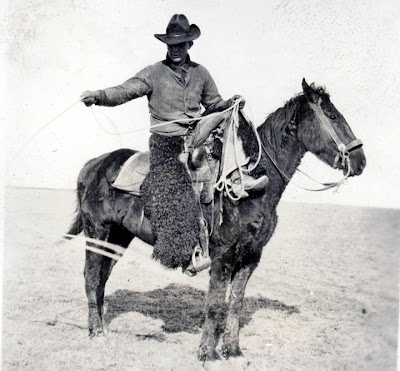 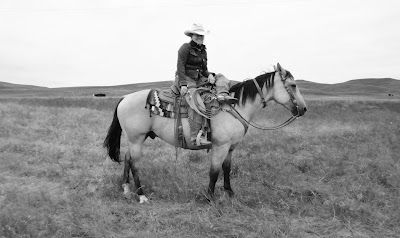 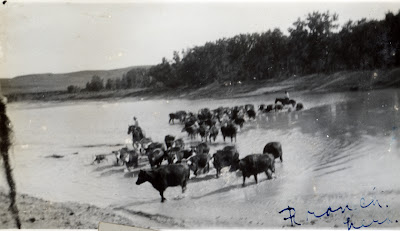