This morning was like a scene from one of many old predictable formula Westerns. Riding and seeing vultures circling overhead. I thought it was the snake bit calf I found Monday, but I rode up and found my ol' horse, Beau, dead. It caught me off guard and wondered if he had been struck by lightening?

I started this ranching adventure with Beau. I remember the day my ranching partner rode out on him and he was presented to me to use - I was hooked. And thus my ranching life chapter began and I began to learn to cowboy as a complete novice on Beau. I saw my first ranching experiences from his back and covered a lot of miles together.


The first spring I worked here just my ranching partner and I branded his entire herd alone. As I had helped out for free the first winter I started here - it was proposed that if I roped all the calves myself  then Beau would be mine. Needless to say, that branding took quite a while as it was my first time - but I did it and Beau was mine. He was green when we started out - and so was I. He was my first photography horse and those are his ears in the photograph on  MY RANCHING LIFE BILLBOARD. I was given a gift of a hand tooled wallet with his picture on it and will keep it forever. We rode, branded, calved, crossed rivers and more together - he was a good ranch horse for me.

He could sure shy low and hard and had me hanging on by a toenail, once, when a jackrabbit jumped up in front of us. But he was super gentle for me. I got in my first wreck on him when I heeled a cow while my partner had the head - after we doctored it I didn't handle my slack properly, as i was tied on hard and fast, and we went down when the rope got under his leg. Luckily he was not hurt. Unfortunately, years later, he developed some lameness issues. We worked with a shoe with a raised heel for a while but then decided to turn him out and see. He had been out of commission for quite a while, but I still liked to see him run free in the pasture as he wasn't in too bad of shape.

I guess our era together ended when we quit riding - now it is definite. I will miss having him around - as he was my Beau.

See you around Beau Beau - we had some great times together riding the range. 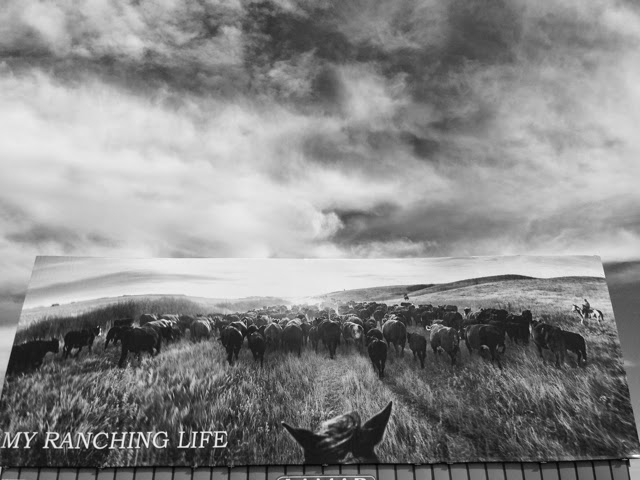 Howard Hawks RED RIVER Style
Up until July 26, 2104
Do a drive by - gallop by - or flyover while you can.
Interstate 90 East - Mile Marker 78.68
Between Rapid City and New Underwood, SD on the south side