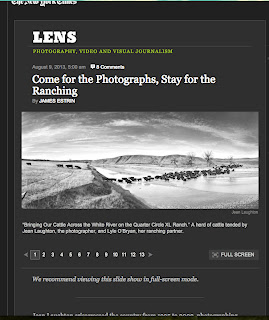 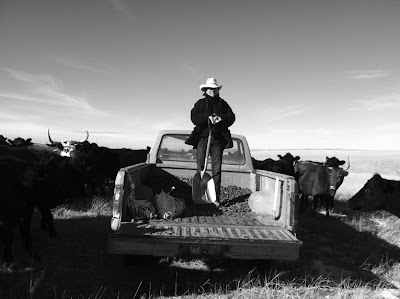 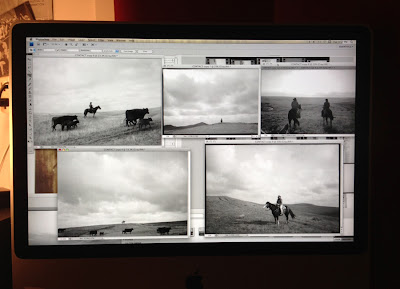 I came across a roll of 35mm film from several years back. Working cattle with Chris Elwood, Diana Elwood, Lyle O'Bryan, Baxter Badure and crew on the old Double X Ranch. Happy days with good friends working out in the big wide open. So much archiving to do.


Film Still from MY RANCHING LIFE series. I hear an enormous swelling cinematic soundtrack when I look at this photograph and think of all the experiences had on the Quarter Circle XL Ranch and all the images, in my mind, of Lyle cowboying.

I was in Deadwood the other day and took Lyle in to see some photographs from MY RANCHING LIFE series at The Lodge at Deadwood. I got a little choked up watching Lyle look at this photograph of himself on Stringy - who is no longer on the ranch - and holding my first horse, Beau. Although he was rough riding and kind of crazy, Lyle had Stringy broke to work and cut cattle without any bridle. I can definitely feel the passage of time now - it is all at a different stage - as hard as I try to make time stand still around me.

Lyle walked up to take a close look at the prints. A real deal looking at a photograph of himself, the real deal. While doing so, a girl from the establishment approached and handed him one of my cards while describing the woman who took the photographs. Lyle replied "Yes, I know her - she leases my place." Very funny. Reality meets what looks like fantasy but is full on reality.

I hope my photographs serve a greater purpose, one day. This is a story of real people doing real ranch work in rural America as my life intertwines with it all. The connections to the cowboys and cowboying of the past are getting fewer and fewer. Lyle is a living example of their teachings and experience. Today is tomorrow's legacy. Long live the American Cowboy.